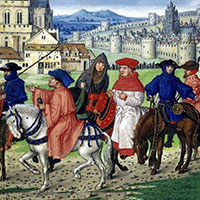 The Canterbury Tales (Middle English: Tales of Caunterbury) is a collection of over 20 stories written in Middle English by Geoffrey Chaucer at the end of the 14th century, during the time of the Hundred Years’ War.

The tales (mostly written in verse, although some are in prose) are presented as part of a story-telling contest by a group of pilgrims as they travel together on a journey from Southwark to the shrine of Saint Thomas Becket at Canterbury Cathedral. The prize for this contest is a free meal at the Tabard Inn at Southwark on their return.

After a long list of works written earlier in his career, including Troilus and Criseyde, House of Fame, and “Parliament of Fowls”, The Canterbury Tales is near-unanimously seen as Chaucer’s magnum opus. He uses the tales and the descriptions of its characters to paint an ironic and critical portrait of English society at the time, and particularly of the Church. Structurally, the collection resembles The Decameron, which Chaucer may have read during his first diplomatic mission to Italy in 1372.

It is sometimes argued that the greatest contribution The Canterbury Tales made to English literature was in popularising the literary use of vernacular, English, rather than French or Latin. English had, however, been used as a literary language centuries before Chaucer’s time, and several of Chaucer’s contemporaries—John Gower, William Langland, the Pearl Poet, and Julian of Norwich—also wrote major literary works in English. It is unclear to what extent Chaucer was responsible for starting a trend as opposed to simply being part of it.