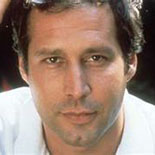 Born into a prominent New York family, Chase worked a plethora of odd jobs before he moved into comedy and began acting with National Lampoon. He quickly became a key cast member in the inaugural season of Saturday Night Live, where his Weekend Update skit soon became a staple of the show.

Chase is well known for his portrayal of the character Clark Griswold in four National Lampoon’s Vacation films, and for his roles in comedies including Foul Play (1978), Caddyshack (1980), Seems Like Old Times (1980), Fletch (1985), Spies Like Us (1985), and ¡Three Amigos! (1986). He has hosted the Academy Awards twice (1987 and 1988) and briefly had his own late-night talk show, The Chevy Chase Show. In 2009, he became a regular cast member (Pierce Hawthorne) on the NBC comedy series Community. Chase left the show in 2012, having already filmed most of the episodes in season 4.