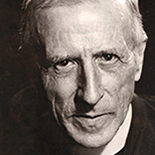 He trained as a paleontologist and geologist and took part in the discovery of Peking Man. Teilhard conceived the idea of the Omega Point (a maximum level of complexity and consciousness towards which he believed the universe was evolving) and developed Vladimir Vernadsky’s concept of Noosphere.

Teilhard de Chardin has two comprehensive works. First, The Phenomenon of Man, sets forth a sweeping account of the unfolding of the cosmos and the evolution of matter to humanity to ultimately a reunion with Christ. Following the leads of St. Ambrose and St. Augustine, he abandoned literal interpretations of creation in the Book of Genesis in favor of an allegorical and theological interpretations.

The second comprehensive work of Teilhard de Chardin is The Divine Milieu which attempted to do two things. First, in the 19th and early 20th centuries there was a belief among some Catholics and other Christians that in order to be “holy” one had to devote himself or herself to purely religious activity and that secular work had no lasting value. Teilhard de Chardin, consistent with the Jesuit motto of “finding God in all things”, wanted to demonstrate that secular work (including his own scientific work) was an integral element of creation and the Incarnation, so that for religious reasons, Christians should be committed to whatever work they were doing and offering it up for the service of God. Teilhard wants to show how all human activities and efforts toward personal growth and human progress can be used to help the growth and development of the Body of Christ. Even though people perform these actions as ordinary human beings, and they look like ordinary human actions, they are simultaneously being transformed in the divine milieu and become actions done in, with, and through Christ.

Some of Teilhard de Chardin’s ideas came into conflict with certain officials in the Roman Curia and in his own Jesuit order. Specifically, Teilhard’s superiors thought that Teilhard’s views on the doctrine of original sin were contrary to Catholic doctrine. As a result, many of Teilhard’s writings were prohibited from being published during his lifetime. However, in recent decades, largely due to the writings and speeches of Pope Benedict XVI and Cardinal Henri de Lubac, Teilhard’s de Chardin’s ideas have become incorporated as part of mainstream Catholic theology. Vatican spokesman Fr. Federico Lombardi said in July 2009: “By now, no one would dream of saying that [Teilhard] is a heterodox author who shouldn’t be studied”.