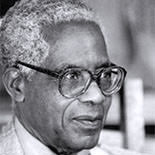 He was “one of the founders of the négritude movement in Francophone literature”.

In 1945, with the support of the French Communist Party (PCF), Césaire was elected mayor of Fort-de-France and deputy to the French National Assembly for Martinique. He was one of the principal drafters of the 1946 law on departmentalizing former colonies, a role for which independent politicians have often criticized him.

Like many left intellectuals in France, Césaire looked in the 1930s and 1940s toward the Soviet Union as a source of human progress, virtue, and human rights, but Césaire later grew disillusioned with Communism. In 1956, after the Soviet Union’s suppression of the Hungarian revolution, Aimé Césaire announced his resignation from the PCF in a text entitled Lettre à Maurice Thorez. In 1958 he founded the Parti Progressiste Martiniquais.

His writings during this period reflect his passion for civic and social engagement. He wrote Discours sur le colonialisme (Discourse on Colonialism) (1950; English translation 1953), a denunciation of European colonial racism, decadence, and hypocrisy that was republished in the French review Présence Africaine in 1955. In 1960, he published Toussaint Louverture, based on the life of the Haitian revolutionary. In 1969, he published the first version of Une Tempête, a radical adaptation of Shakespeare’s play The Tempest for a black audience.

He served as President of the Regional Council of Martinique from 1983 to 1988. He retired from politics in 2001.

THE WOMAN AND THE FLAMEAime Cesaire

Over the hurdles of a scurrilous wind the countryside dismembers for me secrets whose steps resounded at the outlet of the millenary trap of gorges that they tightened to strangulation.

To the trashcan! may they all rot in portraying the banner of a black crow weakening in a beating of white wings.
Serpent
broad and royal disgust overpowering the return in the sands of deception
spindrift nourishing the vain raft of the seagull
in the pale tempest of reassuring silences you the least frail warm yourself
You bathe yourself this side of the most discordant cries on the dreamy spumes of grass
when fire is exhaled from the widow boat that consumes the cape of the echo’s flash
just to make your successive deaths shiver all the more—green frequenting of the elements—your threat.

Your threat yes your threat body issuant from the raucous haze of bitterness where it corrupted the concerned lighthouse keeper and that whistling takes its little gallop time toward the assassin rays of discovery.