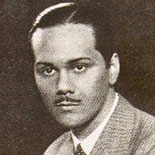 Cernuda was a member of the Generation of ’27. During the Spanish Civil War, in early 1938, he went to the UK to deliver some lectures and this became the start of an exile that lasted till the end of his life.

He taught in the universities of Glasgow and Cambridge before moving in 1947 to the US. In the 1950s he moved to Mexico. While he continued to write poetry, he also published wide-ranging books of critical essays, covering French, English and German as well as Spanish literature. He was frank about his homosexuality at a time when this was problematic and became something of a role model for this in Spain. His collected poems were published under the title La realidad y el deseo.

BIRDS IN THE NIGHT
Luis Cernuda

The French—or was it the English?—government placed a plaque
On that house at 8 Great College Street, Camden Town, London,
Where in a room Rimbaud and Verlaine, a peculiar couple,
Lived, drank, worked, and fornicated
For a few brief stormy weeks.
No doubt the ambassador and the mayor attended the dedication,
All the same people who were enemies of Rimbaud and Verlaine when they lived.

The house is sad and poor, like the neighborhood,
With the sordid sadness that goes with poverty,
Not the funereal sadness of spiritless wealth.
When night comes down, as in their time,
Over that sidewalk, with its damp gray air, a hand organ
Plays, and the neighbors, on their way home from work,
The young ones dance, the rest take to the pub.

Brief was the singular friendship of Verlaine the drunk
And Rimbaud the tramp, quarreling constantly.
But we can think that maybe it was
A good time for the two, at least if each remembered
That they left behind an intolerable mother and a boring wife.
But freedom is not of this world, and the freed,
Having broken with everything, had a high price to pay.

Yes, they were there, the plaque says so, behind the wall,
Prisoners of their fate: the impossible friendship, the bitterness
Of separation, and then the scandal; and for this one
The trial, and two years in jail, thanks to his habits
Condemned by society and law, at least up to now; for that one on his own
To wander from one corner of the earth to the other,
Escaping to our world and its celebrated progress.

The silence of one and the talkative banality of the other
Made for a kind of balance. Rimbaud rejected the hand that Oppressed
His life; Verlaine kisses it, accepting his punishment.
One drags in his belt the gold he’s gained; the other
Wastes it on absinthe and whores. But both
Outside the law forever, beyond the respectable people
Whose meaningless work makes them rich and successful.

Then even the black prostitute had the right to insult them;
Today, as time has passed, as it does in the world,
Their lives on the edge of everything, sodomy, drunkenness, vicious verses,
No longer matter, and France makes use of both their names and their works
For the greater glory of France and its logical art.
Their acts and their comings and goings are studied, giving the public
Intimate tidbits about their lives. No one is shocked now, nor protests.

“Verlaine? Go on, my friend, a satyr, a regular lech
When it comes to women; a perfectly normal fellow,
Like you and I. Rimbaud? A devout Catholic, as it’s been proved.”
And they recite hunks of the “Drunken Boat” and the Sonnet to the “Vowels.”
But of Verlaine they recite nothing, because he’s not in vogue
Like the other, of whom they bring out phony texts in fancy editions;
Young poets, in every country, talk about him nonstop in their provinces.

Can the dead hear what the living are saying about them?
Let’s hope not: that endless silence must be a relief
For those who lived and died by the word,
Like Rimbaud and Verlaine. But the silence there is no escape
From this repugnant laudatory farce. There was a time one of them wished
That humanity had a single head, so it could be chopped off.
Maybe he was exaggerating: if it were just a cockroach, and be crushed.

If the Arab musician
Plucks the lute strings
With an eagle quill
To awaken the notes,

What hand plucks
With what bird’s quill
The wound in you
That awakens the word?