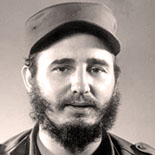 He also served as the Commander in Chief of the Cuban Revolutionary Armed Forces from 1959 to 2008, and as the First Secretary of the Communist Party of Cuba from 1961 until 2011.

Politically a Marxist-Leninist, under his administration the Republic of Cuba became a one-party socialist state; industry and businesses were nationalized, and socialist reforms implemented in all areas of society. Internationally, Castro was the Secretary-General of the Non-Aligned Movement from 1979 to 1983 and from 2006 to 2008.

In 1961 Castro proclaimed the socialist nature of his administration, with Cuba becoming a one-party state under Communist Party rule; the first of its kind in the Western hemisphere. Adopting a Marxist-Leninist model of development, socialist reforms introducing central economic planning and expanding healthcare and education were accompanied by state control of the press and the suppression of internal dissent. Abroad, Castro supported foreign revolutionary groups in the hope of toppling world capitalism, also sending Cuban troops to aid leftist allies in the Yom Kippur War, Ogaden War, and Angolan Civil War. Following the Soviet Union’s dissolution in 1991, Castro led Cuba into its economic “Special Period”, before forging alliances in the Latin American Pink Tide – namely with Hugo Chávez’s Venezuela – and joining the Bolivarian Alliance for the Americas in 2006. Due to failing health, in 2006 he transferred his responsibilities to Vice-President Raúl Castro, who formally assumed the presidency in 2008.

Castro is a controversial and divisive world figure, lauded by his supporters as a champion of socialism, anti-imperialism, humanitarianism, and environmentalism, but viewed by his critics as a dictator who has overseen multiple human-rights abuses, an exodus of more than one million Cubans, and the impoverishment of the country’s economy. Through his actions and his writings he has significantly influenced the politics of various individuals and groups across the world.