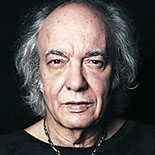 Erasmo Carlos, born Erasmo Esteves on June 5, 1941, is a Brazilian singer and songwriter.

Carlos is most closely associated with his friend and longtime collaborator Roberto Carlos (no relation). Together, they have created many chart hits including “É Proibido Fumar”.

In contrast to his simpler pop-rock early sound, Erasmo went on to produce several of the more moody and introspective MPB records of the 1970s, including Sonhos e Memórias and Carlos, Erasmo.