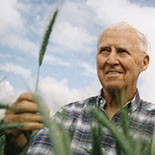 Borlaug has been called “the father of the Green Revolution”, “agriculture’s greatest spokesperson” and “The Man Who Saved A Billion Lives”. He is one of seven people to have won the Nobel Peace Prize, the Presidential Medal of Freedom and the Congressional Gold Medal and was also awarded the Padma Vibhushan, India’s second highest civilian honor.