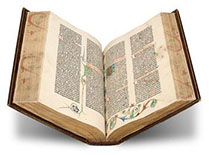 The Gutenberg Bible (also known as the 42-line Bible, the Mazarin Bible or the B42) was the first major book printed in the West using movable type.

It marked the start of the “Gutenberg Revolution” and the age of the printed book in the West. Widely praised for its high aesthetic and artistic qualities, the book has an iconic status. Written in Latin, the Gutenberg Bible is an edition of the Vulgate, printed by Johannes Gutenberg, in Mainz, in present-day Germany, in the 1450s. Forty-eight copies, or substantial portions of copies, survive, and they are considered to be among the most valuable books in the world, even though no complete copy has been sold since 1978. The 36-line Bible, believed to be the second printed version of the Bible, is also sometimes referred to as a Gutenberg Bible, but is likely the work of another printer.