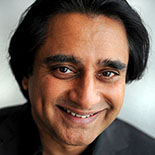 Sanjeev Bhaskar, (born October 31, 1963) is a British comedian, actor and broadcaster, best known for his work in the BBC Two comedy series Goodness Gracious Me and as host of The Kumars at No. 42.

He also presented and starred in a documentary series called India with Sanjeev Bhaskar in which he travelled to India and visited his ancestral home in today’s Pakistan.