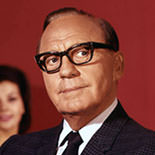 Jack Benny (born Benjamin Kubelsky; February 14, 1894 – December 26, 1974) was an American comedian, vaudevillian, radio, television, and film actor, and violinist. Recognized as a leading American entertainer of the 20th century, Benny portrayed his character as a miser, playing his violin badly. In character, he would be 39 years of age, regardless of his actual age.

Benny was known for comic timing, and the ability to create laughter with a pregnant pause or a single expression, such as his signature exasperated “Well!” His radio and television programs, popular from the 1930s to the 1960s, were a major influence on the sitcom genre.

Benny’s comic persona changed over the course of his career. At some point he developed a miserly persona. This stage character was everything that Jack Benny was not: cheap, petty, vain, and self-congratulatory. His comic rendering of these traits was the linchpin to the success of his show. Benny set himself up as comedic foil, allowing his supporting characters to draw laughs at the expense of his own flaws. With his humanism and vulnerability in an era where few male characters were allowed such character traits, Benny made what could have been unlikable an everyman character. Benny said: “I don’t care who gets the laughs on my show, as long as the show is funny.” Jack felt he got the credit or blame either way, not the actor saying the lines, so there was emphasis on the comedic bottom line.