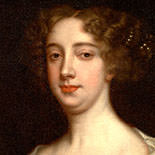 As one of the first English women to earn her living by her writing, she broke cultural barriers and served as a literary role model for later generations of women authors. Rising from obscurity, she came to the notice of Charles II, who employed her as a spy in Antwerp. Upon her return to London and a probable brief stay in debtors’ prison, she began writing for the stage. She belonged to a coterie of poets and famous libertines such as John Wilmot, Lord Rochester. She wrote under the pastoral pseudonym Astrea. During the turbulent political times of the Exclusion Crisis, she wrote an epilogue and prologue that brought her into legal trouble; she thereafter devoted most of her writing to prose genres and translations. A staunch supporter of the Stuart line, she declined an invitation from Bishop Burnet to write a welcoming poem to the new king William III. She died shortly after.

She is famously remembered in Virginia Woolf’s A Room of One’s Own: “All women together ought to let flowers fall upon the tomb of Aphra Behn which is, most scandalously but rather appropriately, in Westminster Abbey, for it was she who earned them the right to speak their minds.” Her grave is not included in the Poets’ Corner but lies in the East Cloister near the steps to the church.

All trembling in my arms Aminta lay,
Defending of the bliss I strove to take;
Raising my rapture by her kind delay,
Her force so charming was and weak.
The soft resistance did betray the grant,
While I pressed on the heaven of my desires;
Her rising breasts with nimbler motions pant;
Her dying eyes assume new fires.
Now to the height of languishment she grows,
And still her looks new charms put on;
– Now the last mystery of Love she knows,
We sigh, and kiss: I waked, and all was done.

`Twas but a dream, yet by my heart I knew,
Which still was panting, part of it was true:
Oh how I strove the rest to have believed;
Ashamed and angry to be undeceived!

Amyntas led me to a Grove,
Where all the Trees did shade us;
The Sun it self, though it had Strove,
It could not have betray’d us:
The place secur’d from humane Eyes,
No other fear allows,
But when the Winds that gently rise,
Doe Kiss the yielding Boughs.

Down there we satt upon the Moss,
And did begin to play
A Thousand Amorous Tricks, to pass
The heat of all the day.
A many Kisses he did give:
And I return’d the same
Which made me willing to receive
That which I dare not name.
His Charming Eyes no Aid requir’d
To tell their softning Tale;
On her that was already fir’d,
‘Twas Easy to prevaile.
He did but Kiss and Clasp me round,
Whilst those his thoughts Exprest:
And lay’d me gently on the Ground:
Ah who can guess the rest?