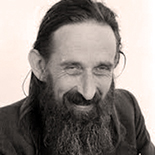 In his short life he produced a huge number of poems, as well as plays, literary criticism, and social and religious commentary. A hugely influential figure, Baxter was as well known for his life as for his writing.

Speaking at a writers’ conference in 1951, Baxter had argued that it was ‘reasonable and necessary that poetry should contain moral truth, and that every poet should be a prophet according to his lights’. His bearded and shabby appearance, and outspoken attitudes towards the authorities, earned him a dubious national celebrity.

Hard, heavy, slow, dark
Or so I find them, the hands of Te Whaea

Teaching me to die. Some lightness will come later
When the heart has lost its unjust hope

For special treatment. Today I go with a bucket
Over the paddocks of young grass

So delicate like the fronds of maidenhair,
Looking for mushrooms. I find twelve of them,

Most of them little, and some eaten by maggots,
But they’ll do to add to the soup. It’s a long time now

Whatever one uses as a bridge
To cross the river that only has one beach,

And even one’s name is a way of saying –
‘This gap inside a coat’ – the darkness I call God,

The darkness I call Te Whaea, how can they translate
The blue calm evening sky that a plane tunnels through

Like a wasp, or the bucket in my hand,
Into something else? I go on looking

For mushrooms in the field, and the fist of longing
Punches my heart, until it is too dark to see.

I saw the Maori Jesus
Walking on Wellington Harbor.
He wore blue dungarees,
His beard and hair were long.
His breath smelled of mussels and paraoa.
When he smiled it looked like the dawn.
When he broke wind the little fishes trembled.
When he frowned the ground shook.
When he laughed everybody got drunk.

The Maori Jesus came on shore
And picked out his twelve disciples.
One cleaned toilets in the railway station;
His hands were scrubbed red to get the shit out of the pores.
One was a call-girl who turned it up for nothing.
One was a housewife who had forgotten the Pill
And stuck her TV set in the rubbish can.
One was a little office clerk
Who’d tried to set fire to the Government Buildings.
Yes, and there were several others;
One was a sad old quean;
One was an alcoholic priest
Going slowly mad in a respectable parish.

The Maori Jesus said, ‘Man,
From now on the sun will shine.’

He did no miracles;
He played the guitar sitting on the ground.

The first day he was arrested
For having no lawful means of support.
The second day he was beaten up by the cops
For telling a dee his house was not in order.
The third day he was charged with being a Maori
And given a month in Mt Crawford.
The fourth day he was sent to Porirua
For telling a screw the sun would stop rising.
The fifth day lasted seven years
While he worked in the Asylum laundry
Never out of the steam.
The sixth day he told the head doctor,
‘I am the Light in the Void;
I am who I am.’
The seventh day he was lobotomized;
The brain of God was cut in half.

On the eighth day the sun did not rise.
It did not rise the day after.
God was neither alive nor dead.
The darkness of the Void,
Mountainous, mile-deep, civilized darkness
Sat on the earth from then till now.