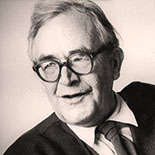 Karl Barth (May 10, 1886 – December 10, 1968) was a Swiss Reformed theologian who is often regarded as the greatest Protestant theologian of the twentieth century.

Pope Pius XII called him the most important Christian theologian since St. Thomas Aquinas. His influence expanded well beyond the academic realm to mainstream culture, leading him to be featured on the cover of Time on April 20, 1962.