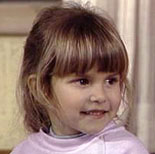 She began her career in television, making appearances in commercials and television shows, and later appeared in the films Jaws: The Revenge, The Land Before Time, and All Dogs Go to Heaven, supplying the voice for animated characters in the latter two.