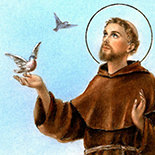 On July 16, 1228, he was proclaimed a saint by Pope Gregory IX. He is known as the patron saint of animals and the environment, and is one of the two patron saints of Italy (with Catherine of Siena). It is customary for Catholic and Anglican churches to hold ceremonies blessing animals on his feast day of October 4. He is also known for his love of the Eucharist, his sorrow during the Stations of the Cross, and for the creation of the Christmas crèche or Nativity Scene.