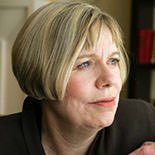 Karen Armstrong (born November 14, 1944) is a British author and commentator known for her books on comparative religion.

A former Roman Catholic religious sister, she went from a conservative to a more liberal and mystical Christian faith. She attended St Anne’s College, Oxford, while in the convent and majored in English. She became disillusioned and left the convent in 1969. She first rose to prominence in 1993 with her book A History of God: The 4,000-Year Quest of Judaism, Christianity and Islam. Her work focuses on commonalities of the major religions, such as the importance of compassion and the Golden Rule.

Armstrong received the $100,000 TED Prize in February 2008. She used that occasion to call for the creation of a Charter for Compassion, which was unveiled the following year.