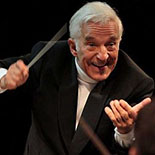 He began playing piano at the age of six. He was accepted to the Central Music School at age eight studying with Anaida Sumbatyan. Ashkenazy attended the Moscow Conservatory where he studied with Lev Oborin and Boris Zemliansky.

As a student, like many in that period, he was harassed by the KGB to become an “informer”. He did not really cooperate, and despite pressures from the authorities, in 1961 married the Iceland-born Þórunn Jóhannsdóttir, who studied piano at the Moscow Conservatoire. To marry Ashkenazy, Þórunn was forced to give up her Icelandic citizenship and declare that she wanted to live in the USSR.