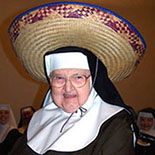 She is best known as a television personality and the founder of the Eternal Word Television Network.

In 1944, she entered the Poor Clares of Perpetual Adoration, a Franciscan religious order for women, as a postulant, and a year later she was admitted to the order as a novice. She went on to find a new house for the order in 1962 in Irondale, Alabama, where the EWTN is headquartered, and in 1996 she initiated the building of the Shrine of the Most Blessed Sacrament and Our Lady of the Angels monastery in Hanceville, Alabama.

Mother Angelica hosted shows on EWTN until she suffered a stroke in 2001. She is a recipient of the Pro Ecclesia et Pontifice Award granted by Pope Benedict XVI and lives in the cloistered monastery in Hanceville.