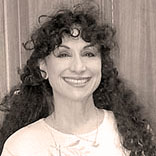 Diane Ackerman (born October 7, 1948) is an American author, poet, and naturalist known best for her work A Natural History of the Senses. Her writing style combines poetry, colloquial history, and popular science.

City of paper floating between seas,
where slow-motion giants pump iron underground
and fog pours from a panting mouth
below the street; petrified city, city of amber sap
sealing a million lives in one drop;

City of grime, where the weekends
wash ashore each Monday morning;
whose pilgrims, arriving by steamer,
lived like cattle and kings, and still do—
the poor in steerage, the rich high above;

City of flesh, whose ribs arch above rivers,
whose organs gleam, where animal life spills
from the streets and the gutters are blood canals;
city where the lightest decision or indecision
feeds a dozen men with martinis and knives;

City of art, where one’s fingers grow extra joints,
learn to bend sideways and break without pain;
where people gallop like a horse to the fence
of a relationship, the sanctuary of a thigh, the waterhole
where the birdlike mate in mirrors;

City of signs, whose people dream
the American Dream (to belong everywhere to everyone),
but settle for a neighborhood;
city where spores blowing in from the country
fill dry sinuses with hope, and a blade of grass
busting through mortar or brick
becomes concrete as winter, city of grit;

City of wire, where even the indolent and icy
can live hot on the senses, grasping the inner electric
of city life like a third rail, then breathing fire
until their lips spark; city whose lights blossom at nightfall,
city of neon gardens and time verandas;
city of tides, city of glass, tribal city, city of masks;
fiesta city, over which an invisible piñata spins