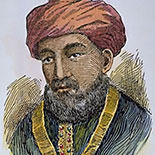 Todros ben Judah Halevi Abulafia (1247 – after 1300) was a Jewish poet who wrote primarily in Hebrew. He also wrote poems in Arabic.

Abulafia collected his poems in diwan, which he called Gan HaMeshalim veHaHidot (The Garden of Parables and Riddles). The collection of poems was written mostly in Hebrew and included poems by other authors as well. Also included were 35 poems that represented a poetic debate between Todros Abulafia and the poet Phinehas Halevi.

Angel Sáenz-Badillos, Professor in the Hebrew Department in Spain, believes that Abulafia was “probably the best and most prolific author of Christian Spain during the reigns of Alfonso the Learned and his son Sancho IV of Castile.

Todros ben Judah HaLevi Abulafia should not be mixed up with Todros ben JOSEPH HaLevi Abulafia, his first cousin. Ben JUDAH was a poet and a womanizer. Ben JOSEPH was a kabbalist and a rabbi. They knew one another, but their lives were very different.

Time tries as I drift across it
to sink me by mixing my nectar with poison:
against my body it raised its hand,
after taking my wealth and son.

But I will foil all its plans.
I’ll praise my Maker, with endless song.

On an Arab girl whom I’d love to have as a lover, whom I saw with other women kissing one another.

I’ve known love’s labor pangs, but brought forth naught.
I’m in the snares of her, an Arab fawn.
My soul so longs for kisses from her mouth
That I long to turn myself into a female
For it is women that she’ll woo and kiss
But I am lost. For I was born a male.