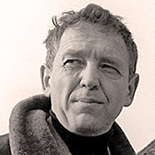 He was one of the best-known U.S. artists of the middle 20th century. In his art, Wyeth’s favorite subjects were the land and people around him, both in his hometown of Chadds Ford, Pennsylvania, and at his summer home in Cushing, Maine. One of the best-known images in 20th-century American art is his painting, Christina’s World, currently in the collection of the Museum of Modern Art in New York City. 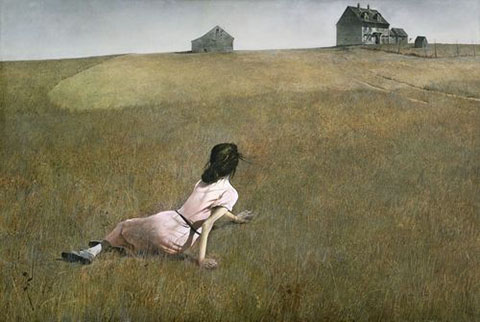 It was at the Olson farm in Cushing, Maine that he painted Christina’s World (1948). Perhaps his most famous image, it depicts his neighbor, Christina Olson, sprawled on a dry field facing her house in the distance. Wyeth was inspired by Christina, who, crippled with polio and unable to walk, spent most of her time at home.

The Olson house has been preserved, renovated to match its appearance in Christina’s World. It is open to the public as a part of the Farnsworth Art Museum.

Wyeth created nearly 300 drawings, watercolor and tempera paintings, mostly in a palette of gold, charcoal, brown and blue. Because of Wyeth’s popularity, the property was designated a National Historic Landmark in June 2011.

A short distance from the house near the water is the Hathorn family cemetery which includes the burial place of Christina Olson, her brother Alvaro and Andrew Wyeth. In a 2007 interview, Wyeth’s granddaughter, Victoria, revealed he wanted to be buried near Christina and the spot where he painted Christina’s World.