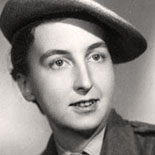 Given the code name “Marie”, Witherington was dropped by parachute into occupied France on September 22, 1943. There she joined Maurice Southgate, leader of the SOE Stationer Network. Over the next eight months, she worked as Southgate’s courier.

After the Gestapo arrested Southgate in May 1944 and deported her to Buchenwald concentration camp, Witherington became leader of the new SOE Wrestler Network, under the new code-name “Pauline”, in the Valencay–Issoudun–Châteauroux triangle. She reorganised the network with the help of her fiancé, Henri Cornioley, and it fielded over 1,500 members of the Maquis. They played an important role fighting the German Army during the D-Day landings. They were so effective that the Nazi regime put a ƒ1,000,000 bounty on Witherington’s head. The Germans even ordered 2,000 men to attack her force with artillery in a 14-hour battle. Cornioley reported, “We were attacked by 2,000 Germans on the June 11th [1944] at 8 o’clock in the morning and the small maquis, comprising approximately 40 men, badly armed and untrained, put up a terrific fight, with the neighbouring communist maquis which numbered approximately 100 men.”