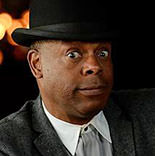 Michael Winslow (born September 6, 1958) is an American actor, beatboxer and comedian billed as the “Man of 10,000 Sound Effects” for his ability to make realistic sounds using only his voice.

Winslow is best known for his roles in all seven Police Academy films as Larvelle Jones. He has also appeared in Spaceballs, “Cheech and Chong’s Next Movie”, and a Cadbury commercial.