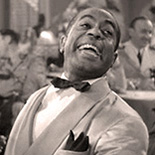 Wilson is best remembered as the piano-player and singer Sam who sings “As Time Goes By” at the request of Ilsa Lund (Ingrid Bergman) in Casablanca (1942).

Wilson was a drummer and singer who led his own band in the 1920s, touring nightclubs in London and Paris. In the 1930s he took up acting for good, playing supporting roles onstage on Broadway and in a series of modest films. His role in Casablanca was by far his most prominent, but his other films included My Favorite Blonde (1942) with Bob Hope, Stormy Weather (1943) with Lena Horne and the Nicholas Brothers), and the western Passage West (1951).