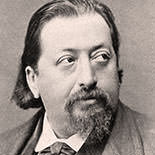 Wieniawski was given a number of posthumous honors. Hisportrait appeared on a postage stamp of Poland in 1952 and again in 1957. A 100 złoty coin was issued in 1979 bearing his image.