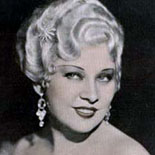 Known for her bawdy double entendres, West made a name for herself in vaudeville and on the stage in New York before moving to Hollywood to become a comedienne, actress and writer in the motion picture industry. In consideration of her contributions to American cinema, the American Film Institute named West 15th among the greatest female stars of all time. One of the more controversial movie stars of her day, West encountered many problems, including censorship. When her cinematic career ended, she continued to perform on stage, in Las Vegas, in the United Kingdom, on radio and television, and recorded rock and roll albums. Asked about the various efforts to impede her career, West said, “I believe in censorship. I made a fortune out of it.”