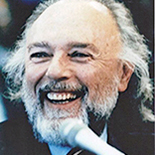 George David Weiss (April 9, 1921 – August 23, 2010) was an American songwriter and former President of the Songwriters Guild of America.

“What a Wonderful World” is a song written by George David Weiss and Bob Thiele. It was first recorded by Louis Armstrong and released as a single in 1967.

Intended as an antidote for the increasingly racially and politically charged climate of everyday life in the United States, the song also has a hopeful, optimistic tone with regard to the future, with reference to babies being born into the world and having much to look forward to. The song was initially offered to Tony Bennett, who turned it down.Thereafter, it was offered to Louis Armstrong. George Weiss recounts in the book Off the Record: Songwriters on Songwriting by Graham Nash that he wrote the song specifically for Louis Armstrong. George was inspired by Louis’s ability to bring people of different colors together. The song was not initially a hit in the United States, where it sold fewer than 1,000 copies because the ABC Records head Larry Newton did not like the song and so did not promote it, but was a major success in the United Kingdom, reaching number one on the UK Singles Chart.

I see trees of green,
red roses too.
I see them bloom,
for me and you.
And I think to myself,
what a wonderful world.

I see skies of blue,
And clouds of white.
The bright blessed day,
The dark sacred night.
And I think to myself,
What a wonderful world.

The colors of the rainbow,
So pretty in the sky.
Are also on the faces,
Of people going by,
I see friends shaking hands.
Saying, “How do you do?”
They’re really saying,
“I love you”.

I hear babies cry,
I watch them grow,
They’ll learn much more,
Than I’ll ever know.
And I think to myself,
What a wonderful world.

Yes, I think to myself,
What a wonderful world.