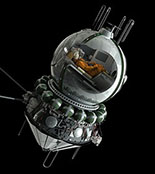 The Vostok 3KA spacecraft was launched on April 12, 1961 from Baikonur Cosmodrome with Soviet cosmonaut Yuri Gagarin, making him the first human to cross into outer space.

The spaceflight consisted of one orbit around Earth, the shortest manned orbital flight to date. According to official records, the spaceflight took 108 minutes from launch to landing. As planned, Gagarin parachuted to the ground separately from his spacecraft after ejecting at 7 km (23,000 ft) altitude.