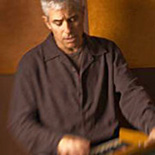 Jai Uttal, born June 12, 1951, is a Grammy nominated singer and “a pioneer in the world music community with his eclectic East-meets-West sound.”He is a “sacred music composer, recording artist, multi-instrumentalist, and ecstatic vocalist, [who] combines influences from India with American rock and jazz to create a stimulating and exotic multicultural fusion that is truly world spirit music.”

In 2003, Jai began the first of several recordings focused on the practice of bhakti yoga (kirtan) for the Sounds True label. These have included: Kirtan! The Art and Practice of Ecstatic Chant, Music for Yoga and Other Joys, Loveland, Dial M for Mantra, and Pranayama, a collaboration with his wife, yoga teacher and bhakti dancer, Nubia Teixeira. The two had a son, Ezra, which led to Jai’s inspiration to focus his work towards kids. Jai began to lead children’s kirtan events near his home in Northern California and he created an album especially for children entitled Kirtan Kids: The Elephant, the Monkey, and the Little Butter Thief.In addition to those, Jai also hosted donation-based events at several yoga studios. At these particular events, children would sit around in a circle and listen as Jai told “colorful stories drawn from Ramayana and other Indian myths.” The chants during these events were kid-friendly versions.

“Kirtan Kids recreates the feeling of these events and gives parents a new way to introduce children to kirtan.”The album features “an elephant solo, the sounds of banging pots and pans, and music from about a dozen instruments, including the glockenspiel and a toy piano.”The album also includes “narrated tales of Gopala, the child form of Krishna; the elephant-headed god Ganesha; and the monkey god Hanuman.”