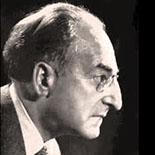 Louis Untermeyer (October 1, 1885 – December 18, 1977) was an American poet, anthologist, critic, and editor. He was appointed the fourteenth Poet Laureate Consultant in Poetry to the Library of Congress in 1961.

ON THE BIRTH OF A CHILD
Louis Untermeyer

Lo, to the battle-ground of Life,
Child, you have come, like a conquering shout,
Out of a struggle—into strife;
Out of a darkness—into doubt.

Girt with the fragile armor of youth,
Child, you must ride into endless wars,
With the sword of protest, the buckler of truth,
And a banner of love to sweep the stars.

About you the world’s despair will surge;
Into defeat you must plunge and grope.
Be to the faltering an urge;
Be to the hopeless years a hope!

Be to the darkened world a flame;
Be to its unconcern a blow—
For out of its pain and tumult you came,
And into its tumult and pain you go.

PORTRAIT OF A MACHINE
Louis Untermeyer

What nudity as beautiful as this
Obedient monster purring at its toil;
These naked iron muscles dripping oil
And the sure-fingered rods that never miss.
This long and shining flank of metal is
Magic that greasy labor cannot spoil;
While this vast engine that could rend the soil
Conceals its fury with a gentle hiss.
It does not vent its loathing, it does not turn
Upon its makers with destroying hate.
It bears a deeper malice; lives to earn
It’s masters bread and laughs to see this great
Lord of the earth, who rules but cannot learn,
Become the slave of what his slaves create.