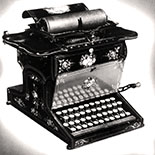 The Sholes and Glidden typewriter (also known as the Remington No. 1) was the first commercially successful typewriter.

Principally designed by the American inventor Christopher Latham Sholes, it was developed with the assistance of fellow printer Samuel W. Soule and amateur mechanic Carlos S. Glidden. Work began in 1867, but Soule left the enterprise shortly thereafter, replaced by James Densmore, who provided financial backing and the driving force behind the machine’s continued development. After several short-lived attempts to manufacture the device, the machine was acquired by E. Remington and Sons in early 1873. An arms manufacturer seeking to diversify, Remington further refined the typewriter before finally placing it on the market on July 1, 1874.

During its development, the typewriter evolved from a crude curiosity into a practical device, the basic form of which became the industry standard. The machine incorporated elements which became fundamental to typewriter design, including a cylindrical platen and a four-rowed QWERTY keyboard. Several design deficiencies remained, however. The Sholes and Glidden could print only upper-case letters—an issue remedied in its successor, the Remington No. 2—and was a “blind writer”, meaning the typist could not see what was being written as it was entered.

Initially, the typewriter received an unenthusiastic reception from the public. Lack of an established market, high cost, and the need for trained operators slowed its adoption. Additionally, recipients of typewritten messages found the mechanical, all upper-case writing to be impersonal and even insulting. The new communication technologies and expanding businesses of the late 19th century, however, had created a need for expedient, legible correspondence, and so the Sholes and Glidden and its contemporaries soon became common office fixtures. The typewriter is credited with assisting the entrance of women into the clerical workplace, as many were hired to operate the new devices.