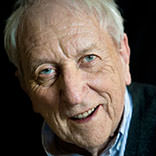 His poems capture the long Swedish winters, the rhythm of the seasons and the palpable, atmospheric beauty of nature. Tranströmer’s work is also characterized by a sense of mystery and wonder underlying the routine of everyday life, a quality which often gives his poems a religious dimension. Indeed, he has been described as a Christian poet.

Tranströmer is acclaimed as one of the most important Scandinavian writers since the Second World War. Critics have praised his poetry for its accessibility, even in translation. His poetry has been translated into over 60 languages. He is the recipient of the 1990 Neustadt International Prize for Literature and the 2011 Nobel Prize in Literature.

AFTER A DEATH
Tomas Transtromer

Once there was a shock
that left behind a long, shimmering comet tail.
It keeps us inside. It makes the TV pictures snowy.
It settles in cold drops on the telephone wires.

One can still go slowly on skis in the winter sun
through brush where a few leaves hang on.
They resemble pages torn from old telephone directories.
Names swallowed by the cold.

It is still beautiful to hear the heart beat
but often the shadow seems more real than the body.
The samurai looks insignificant
beside his armor of black dragon scales.

They switch off the light and its white shade
glimmers for a moment before dissolving
like a tablet in a glass of darkness. Then up.
The hotel walls rise into the black sky.
The movements of love have settled, and they sleep
but their most secret thoughts meet as when
two colors meet and flow into each other
on the wet paper of a schoolboy’s painting.
It is dark and silent. But the town has pulled closer
tonight. With quenched windows. The houses have approached.
They stand close up in a throng, waiting,
a crowd whose faces have no expressions.