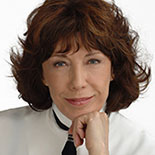 Tomlin has been a major force in American comedy since the late 1960s when she began a career as a stand up comedian and became a featured performer on television’s Laugh-in. Her career has spanned television, comedy recordings, Broadway, and motion pictures, enjoying acclaimed success in each medium.