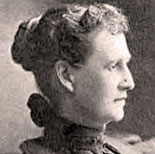 She was born in Mishawaka, Indiana. Among her poems were Curfew Must Not Ring Tonight. The poem was written while Thorpe resided in Litchfield, Michigan, a small rural town. A bell in the center of the town commemorates the poem and Thorpe’s time spent in the town. Litchfield has adopted the title of the poem as something of a symbol, having firetrucks and city website show the symbol of a bell reading “Curfew Shall not Ring Tonight.”

Curfew Must Not Ring Tonight is a narrative poem written in 1867 and set in the 17th century. It was written when she was 16 years old and first published in Detroit Commercial Advertiser.

The story involves Bessie, a young woman whose lover, Basil Underwood, has been arrested, thrown in prison by the Puritans and sentenced to die that night when the curfew bell rings. Knowing that Oliver Cromwell will be late in arriving, the young woman begs the old sexton to prevent the ringing of the curfew bell. When he refuses, she climbs to the top of the bell tower and heroically risks her life by manually stopping the bell from ringing. Cromwell hears of her deed and is so moved that he issues a pardon for Underwood.

Slowly England’s sun was setting o’er the hilltops far away,
Filling all the land with beauty at the close of one sad day;
And its last rays kissed the forehead of a man and maiden fair,–
He with steps so slow and weary; she with sunny, floating hair;
He with bowed head, sad and thoughtful, she, with lips all cold and white,
Struggling to keep back the murmur, “Curfew must not ring to-night!”

“Sexton,” Bessie’s white lips faltered, pointing to the prison old,
With its walls tall and gloomy, moss-grown walls dark, damp and cold,–
“I’ve a lover in the prison, doomed this very night to die
At the ringing of the curfew, and no earthly help is nigh.
Cromwell will not come till sunset;” and her lips grew strangely white,
As she spoke in husky whispers, “Curfew must not ring to-night!”

“Bessie,” calmly spoke the sexton (every word pierced her young heart
Like a gleaming death-winged arrow, like a deadly poisoned dart),
“Long, long years I’ve rung the curfew from that gloomy, shadowed tower;
Every evening, just at sunset, it has tolled the twilight hour.
I have done my duty ever, tried to do it just and right:
Now I’m old, I will not miss it. Curfew bell must ring to-night!”

Wild her eyes and pale her features, stern and white her thoughtful brow,
As within her secret bosom, Bessie made a solemn vow.
She had listened while the judges read, without a tear or sigh,
“At the ringing of the curfew, Basil Underwood must “die.
And her breath came fast and faster, and her eyes grew large and bright;
One low murmur, faintly spoken. “Curfew must not ring to-night!”

She with quick step bounded forward, sprang within the old church-door,
Left the old man coming slowly, paths he’d trod so oft before.
Not one moment paused the maiden, But with eye and cheek aglow,
Staggered up the gloomy tower, Where the bell swung to and fro;
As she climbed the slimy ladder, On which fell no ray of light,
Upward still, her pale lips saying, “Curfew shall not ring to-night!”

She has reached the topmost ladder, o’er her hangs the great dark bell;
Awful is the gloom beneath her, like the pathway down to hell.
See! the ponderous tongue is swinging; ’tis the hour of curfew now,
And the sight has chilled her bosom, stopped her breath, and paled her brow.
Shall she let it ring? No, never! Her eyes flash with sudden light,
As she springs, and grasps it firmly: “Curfew shall not ring to-night!”

Out she swung,– far out. The city Seemed a speck of light below,–
There twixt heaven and earth suspended, As the bell swung to and fro.
And the sexton at the bell-rope, old and deaf, heard not the bell,
Sadly thought that twilight curfew rang young Basil’s funeral knell.
“Still the maiden, clinging firmly, quivering lip and fair face white,
Stilled her frightened heart’s wild throbbing: “Curfew shall not ring tonight!”

It was o’er, the bell ceased swaying; and the maiden stepped once more
Firmly on the damp old ladder, where, for hundred years before,
Human foot had not been planted. The brave deed that she had done
Should be told long ages after. As the rays of setting sun
Light the sky with golden beauty, aged sires, with heads of white,
Tell the children why the curfew did not ring that one sad night.

O’er the distant hills comes Cromwell. Bessie sees him; and her brow,
Lately white with sickening horror, has no anxious traces now.
At his feet she tells her story, shows her hands, all bruised and torn;
And her sweet young face, still hagggard, with the anguish it had worn,
Touched his heart with sudden pity, lit his eyes with misty light.
“Go! your lover lives,” said Cromwell. “Curfew shall not ring to-night!”

Wide they flung the massive portals, led the prisoner forth to die,
All his bright young life before him. Neath the darkening English sky,
Bessie came, with flying footsteps, eyes aglow with lovelight sweet;
Kneeling on the turf beside him, laid his pardon at his feet.
In his brave, strong arms he clasped her, kissed the face upturned and white,
Whispered, “Darling, you have saved me, curfew will not ring to-night.”

Take a seat in the shade here, lady;
It’s tiresome, I know, to wait;
But when the train reaches Verona
It’s always sure to be late, ―
‘Specially when any one’s waitin’.
Been gatherin’ flowers, I see?
Ah, well! they’re better company
Than a rough old fellow like me.

You noticed the graves ‘neath the willows,
Down there where the blossoms grew?
Well, yes, there’s a story about them,
Almost too strange to be true;
‘Tis a stranger, sweeter story
Than was ever written in books;
And God made the endin’ so perfect ―
There, now I see by your looks

I will have to tell the story:
Let me see; ’twas eight years ago
One blusterin’ night in winter,
When the air was thick with snow;
As the freight came round the curve there
They beheld a man on the track,
Bravin’ the storm before him, but
Not heedin’ the foe at his back.

And ere a hand could grasp the bell-rope,
Or a finger reach the rod,
One sweep from the cruel snow-plough
Had sent the man’s soul to its God!
They laid him out here in the freight-house,
And I stayed with him that night;
He’d one of the pleasantest faces,
So hopeful and young and bright.

There was only a worn-out letter;
I know it by heart ― it said:
‘Dear John: Baby May grows finely,
I send you this curl from her head.
We will meet you at Brackenboro’.
The grandfather’s sad and lone,
But I read him your kind words, sayin’,
When we’ve a home of our own,’

‘He shall sing the songs of old England
Beneath our own willow tree.’
That was all there was of it, lady,
And ‘t was signed just ‘Alice Leigh.’
So we made a grave in the mornin’
And buried the man out there
Alone, unmourned, in a stranger’s land,
With only a stranger’s prayer.

But when he’d slept in his lonely grave
Out there nigh on to a year,
Ray’s freight ran into a washout
By the culvert, away down here;
There were only two passengers that night,
Dead when we found them there, ―
A sweet little Englishwoman,
And a baby with golden hair.

On her breast lay the laughing baby,
With its rosy finger-tips
Still warm, and the fair young mother
With a frozen smile on her lips.
We laid them out here in the freight-house,
I stayed that night with the dead;
I shall never forget the letter
We found in her purse; it said:

‘Dear Alice: Praise God I’ve got here!
I’ll soon have a home for you now;
But you must come with the baby
As soon as you can anyhow.
Comfort the grandfather, and tell him
That by and by he shall come,
And sing the songs of old England
‘Neath the willows beside our home;’

‘For, close by the door of our cottage
I’ll set out a willow tree,
For his sake and the sake of old England.
Lovingly yours. John Leigh.’

The tears filled my eyes as I read it;
But I whispered, ‘God is just!’
For I knew the true heart yonder ―
Then only a handful of dust ―
Had drawn this sweet little woman
Right here, and God’s merciful love
Had taken her from the sorrow
To the glad reunion above!

So, close by the grave of the other
We laid her away to rest, ―
The golden-haired English mother,
With the baby upon her breast.
I planted those trees above them,
For I knew their story, you see;
And I thought their rest would be sweeter
‘Neath their own loved willow tree.

Five years rolled along; and, lady,
My story may now seem to you
Like a wonderful piece of fiction;
But I tell you it is true, ―
As true as that God is above us!
One summer day, hot and clear,
As the train rolled into the station
And stopped to change engines here,

Among a company of Mormons
Came a tremblin’ white-haired man;
He asked me in waverin’ accents,
‘Will you tell me, sir, if you can,
Of a place called Brackenboro’?
And how far have I got to go?’
‘It’s the next station north,’ I answered,
‘Only thirteen miles below.’

His old face lit up for a moment
With a look of joy complete;
Then he threw up his hands toward Heaven,
And dropped down dead at my feet!
‘Old Hugh Leigh is dead!’ said a Mormon,
‘And sights o’ trouble he’s be ‘n.
Nothin’ would do when we started
But that he must come with us then,’

‘To find Alice, John, and the baby;
And his heart was well-nigh broke
With waitin’ and watchin’ in England
For letters they never wrote.’
So we buried him there with the others,
Beneath the willow tree.
‘T was God’s way of endin’ the story ―
More perfect than man’s could be.