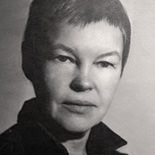 Anna Thilda May “May” Swenson (May 28, 1913 – December 4, 1989) was an American poet and playwright. Harold Bloom considered her one of the most important and original poets of the 20th century.

The first child of Margaret and Dan Arthur Swenson, she grew up as the eldest of 10 children in a Mormon household where Swedish was spoken regularly and English was a second language. Although her conservative family struggled to accept the fact that she was a lesbian, they remained close throughout her life. Much of her later poetry works were devoted to children (e.g. the collection Iconographs, 1970). She also translated the work of contemporary Swedish poets, including the selected poems of Nobel laureate Tomas Tranströmer.

THE SHAPE OF DEATHMay Swenson

What does love look like? We know
the shape of death. Death is a cloud
immense and awesome. At first a lid
is lifted from the eye of light:
there is a clap of sound, a white blossom

belches from the jaw of fright,
a pillared cloud churns from white to gray
like a monstrous brain that bursts and burns,
then turns sickly black, spilling away,
filling the whole sky with ashes of dread;

thickly it wraps, between the clean sea
and the moon, the earth’s green head.Trapped in its cocoon, its choking breath
we know the shape of death:
Death is a cloud.

What does love look like?
Is it a particle, a star –
invisible entirely, beyond the microscope and Palomar?
A dimension unimagined, past the length of hope?
Is it a climate far and fair that we shall never dare

discover? What is its color, and its alchemy?
Is it a jewel in the earth-can it be dug?
Or dredged from the sea? Can it be bought?
Can it be sown and harvested?
Is it a shy beast to be caught?

Death is a cloud,
immense, a clap of sound.
Love is little and not loud.
It nests within each cell, and it
cannot be split.

It is a ray, a seed, a note, a word,
a secret motion of our air and blood.
It is not alien, it is near-
our very skin-
a sheath to keep us pure of fear.

Previous
Next
More May Swenson