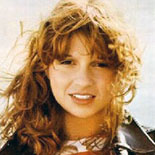 After beginning her singing career at the age of three, when she won an electric garage door opener in a singing contest, she began recording commercials at the age of six, toured with Mickey Rooney, and performed in Las Vegas as the opening act for Bill Cosby at the age of twelve.

Sweet began recording country music in 1974, but with little success beyond one minor Country Chart hit. Switching to rock and roll, she signed to Stiff Records label and released her first album, Fool Around, in 1978, dropping out of high school to concentrate on her career, although she was still required to devote time to her studies. Sweet was backed by The Records on the Stiff Records tour in 1978. The album was a critical success, but sales were poor, although she did have some success with the single “B-A-B-Y” (a cover of the 1966 Carla Thomas song), which was a top-40 hit in the UK. She also generated some controversy for her Lolita-like image. Her follow-up album, Protect the Innocent, produced by Martin Rushent and Alan Winstanley, was largely ignored by the public and the music media, although it was popular with her fans as well as a much anticipated 1980 North American tour with her band The Toys. She then signed to Columbia Records in 1981, releasing … And Then He Kissed Me, which launched the hit single, “Everlasting Love”, a duet with Rex Smith.

Sweet only released one more album, 1982’s Blame it on Love before retiring. She resumed her education via correspondence courses and went on to graduate from Columbia University in French and English Literature in 1988. She returned to music sporadically as she focused on her education, recording the title track to John Waters’ film Hairspray and many of the songs for his musical Cry-Baby. In 1989 and 1990, she hosted a show on The Comedy Channel (forerunner of Comedy Central) called The Sweet Life. She also recorded the theme song to the Nickelodeon series Clarissa Explains It All; the theme song was a reworking of the theme song for her show on The Comedy Channel, The Sweet Life. She also provided the voice for the Barbie animated series. In 1992 Sweet appeared in a minor role as George Costanza’s cousin on an episode of Seinfeld, “The Contest.” She has since focused on establishing an acting, writing, and producing career. In 1994 she appeared in All Tied Up. She worked as a writer and executive producer on the television series Dharma & Greg, Commando Nanny, George Lopez and Hot in Cleveland, and has worked in television production since the late 1990s.