The Rite of Spring is a ballet and orchestral concert work by the Russian composer Igor Stravinsky.

It was written for the 1913 Paris season of Sergei Diaghilev’s Ballets Russes company; the original choreography was by Vaslav Nijinsky, with stage designs and costumes by Nicholas Roerich.

When first performed, at the Théâtre des Champs-Élysées on May 29, 1913, the avant-garde nature of the music and choreography caused a sensation and a near-riot in the audience. Although designed as a work for the stage, with specific passages accompanying characters and action, the music achieved equal if not greater recognition as a concert piece, and is widely considered to be one of the most influential musical works of the 20th century. 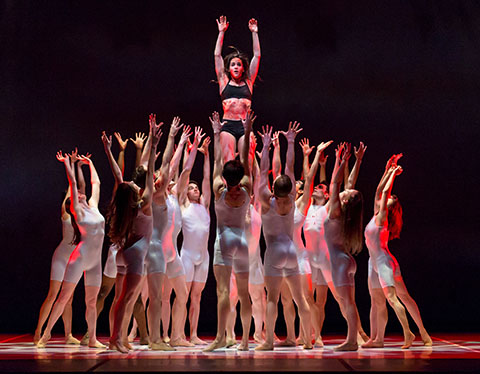 Stravinsky was a young, virtually unknown composer when Diaghilev recruited him to create works for the Ballets Russes. The Rite was the third such project, after the acclaimed The Firebird (1910) and Petrushka (1911). The concept behind The Rite of Spring, developed by Roerich from Stravinsky’s outline idea, is suggested by its subtitle, “Pictures of Pagan Russia in Two Parts”; in the scenario, after various primitive rituals celebrating the advent of spring, a young girl is chosen as a sacrificial victim and dances herself to death. After a mixed critical reception for its original run and a short London tour, the ballet was not performed again until the 1920s, when a version choreographed by Léonide Massine replaced Nijinsky’s original. Massine’s was the forerunner of many innovative productions directed by the world’s leading ballet-masters, which gained the work worldwide acceptance. In the 1980s, Nijinsky’s original choreography, long believed lost, was reconstructed by the Joffrey Ballet in Los Angeles.

Stravinsky’s score contains many novel features for its time, including experiments in tonality, metre, rhythm, stress and dissonance. Analysts have noted in the score a significant grounding in Russian folk music, a relationship Stravinsky tended to deny. The music has influenced many of the 20th-century’s leading composers, and is one of the most recorded works in the classical repertoire.