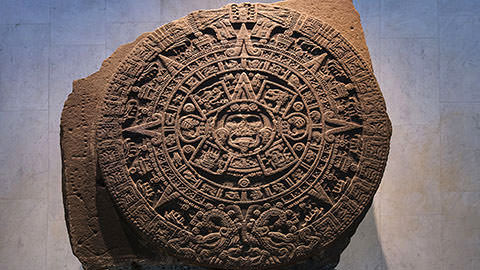 The Sun Stone, Stone of the Five Eras, or sometimes (erroneously) called Aztec calendar stone is a late post-classic Mexica sculpture housed in the National Anthropology Museum in Mexico City, and is perhaps the most famous work of Aztec sculpture.

The stone is 358 centimetres (11.75 ft) in diameter and 98 centimetres (3.22 ft) thick, and it weighs about 24 tons. Shortly after the Spanish conquest, the monolithic sculpture was buried in the Zócalo, or main square of Mexico City. It was rediscovered on December 17, 1790 during repairs on the Mexico City Cathedral. Following its rediscovery, the calendar stone was mounted on an exterior wall of the Cathedral, where it remained until 1885. Most scholars think that the stone was carved some time between 1502 and 1521, though some believe that it is several decades older than that.

The sculpted motifs that cover the surface of the stone refer to central components of the Mexica cosmogony.

In the center of the monolith is the face of the solar deity, Tonatiuh, which appears inside the glyph for “movement” (Nahuatl: ollin), the name of the current era. The central figure is shown holding a human heart in each of his clawed hands, and his tongue is represented by a stone sacrificial knife (Tecpatl).