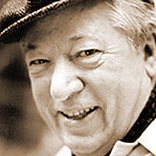 He was appointed the nineteenth Poet Laureate Consultant in Poetry to the Library of Congress from 1968 to 1970.

I’ll love you till Heaven
Rips stars from his coat,
And the Moon rows away in
A glass-bottomed boat;
And Orion steps down
Like a diver below,
And Earth is ablaze,
And Ocean aglow.

So touch the air softly,
And swing the broom high.
We will dust the gray mountains,
And sweep the blue sky;
And I’ll love you as long
As the furrow the plow,
As However is Ever,
And Ever is Now.

THE WORLD BELOW THE WINDOW
William Jay Smith

The geraniums I left last night on the windowsill,
To the best of my knowledge now, are out there still,
And will be there as long as I think they will.

And will be there as long as I think that I
Can throw the window open on the sky,
A touch of geranium pink in the tail of my eye;

As long as I think I see, past leaves green-growing,
Barges moving down a river, water flowing,
Fulfillment in the thought of thought outgoing,

Fulfillment in the sight of sight replying,
Of sound in the sound of small birds southward flying,
In life life-giving, and in death undying.