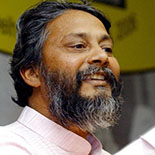 Also known as “waterman of India”, he won the Stockholm Water Prize, an award known as “the Nobel Prize for water”, in 2015. Previously, he won the Ramon Magsaysay Award for community leadership in 2001 for his pioneering work in community-based efforts in water harvesting and water management. He runs an NGO called ‘Tarun Bharat Sangh’, which was founded in 1975. The NGO based in village Kishori-Bhikampura in Thanagazi tehsil, near Sariska Tiger Reserve, has been instrumental in fighting the slow bureaucracy, mining lobby and has helped villagers take charge of water management in their semi-arid area as it lies close to Thar Desert, through the use of johad, rainwater storage tanks, check dams and other time-tested as well as path-breaking techniques. Starting from a single village in 1985, over the years TBS helped build over 8,600 johads and other water conservation structures to collect rainwater for the dry seasons, has brought water back to over 1,000 villages and revived five rivers in Rajasthan, Arvari, Ruparel, Sarsa, Bhagani and Jahajwali.

He is one of the members of the National Ganga River Basin Authority under Ministry of Environment, Govt. of India, which was set up in 2009, by the Government of India as an empowered planning, financing, monitoring and coordinating authority for the Ganges (Ganga), in exercise of the powers conferred under the Environment (Protection) Act,1986. In 2008, The Guardian named him amongst its list of “50 people who could save the planet”.