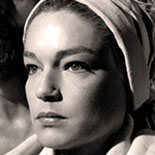 She became the first French person to win an Academy Award, for her role in Room at the Top (1959). In her lifetime she also received a César, three BAFTAs, an Emmy, Cannes Film Festival recognition, the Silver Bear for Best Actress awards and a Golden Globe nomination.