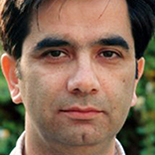 Reza Shirazi was born in Bombay and is Iranian by origin. He is included in two anthologies edited by Naomi Shihab Nye: The Space Between My Footsteps and What Have You Lost? and, most recently, in A World Between: Poems, Short Stories and Essays by Iranian Americans edited by Persis Karim.

A hibernating language
lying in the dark corners of my mind,
awakes slowly after a ten year sleep.

Ragged and unkempt,
it finally tries to rise.
It ventures out
on a wave of words.

The world lies before it
waiting to be sung.