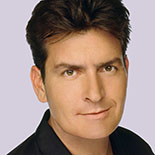 In the 2000s, Sheen became best known for his television roles. He replaced Michael J. Fox in Spin City and his performance earned him a Golden Globe Award for Best Actor – Television Series Musical or Comedy and then starred in Two and a Half Men which earned him several Golden Globe and Emmy Award nominations. He’s currently starring in the FX comedy series Anger Management. In 2010, Sheen was the highest paid actor on television and earned $1.8 million per episode of Two and a Half Men.

Sheen’s personal life has made headlines, including reports of alcohol and drug abuse and marital problems, as well as allegations of domestic violence. He was fired from Two and a Half Men by CBS and Warner Bros. in March 2011. Sheen subsequently went on a nationwide tour.