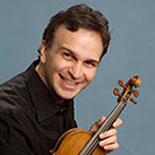 At age 10, Shaham debuted as soloist with the Jerusalem Symphony, conducted by the violinist Alexander Schneider. Less than a year later Shaham performed with Israel’s foremost orchestra, the Israel Philharmonic, which was conducted by Zubin Mehta. At age 11, in 1982, Shaham won first prize in the Claremont Competition and was admitted to the Juilliard School in New York, where he studied with Dorothy DeLay and Hyo Kang. In addition, both he and his younger sister, the pianist Orli Shaham, attended Columbia University.

Shaham’s career took off in 1989 when he was called upon to replace an ailing Itzhak Perlman for a series of concerts with Michael Tilson Thomas and the London Symphony Orchestra. Taking time out from his studies at the Horace Mann School (where he was a senior), he flew to London at short notice,then performed the Bruch and Sibelius violin concertos, for which he garnered glowing reviews.

In 1990 Shaham received the Avery Fisher Career Grant. In 1992 he was awarded the Premio Internazionale of the Accademia Chigiana in Siena.