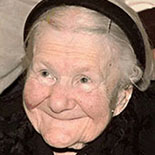 Irena Sendler (née Krzyżanowska, also referred to as Irena Sendlerowa in Poland February 15, 1910 – May 12, 2008) was a Polish nurse/social worker.

Irena served in the Polish Underground during World War II, and as head of children’s section of Żegota, an underground resistance organization in German-occupied Warsaw. Assisted by some two dozen other Żegota members, Sendler smuggled some 2,500 Jewish children out of the Warsaw Ghetto and then provided them with false identity documents and with housing outside the Ghetto, saving those children during the Holocaust.

The Nazis eventually discovered her activities, tortured her, and sentenced her to death, but she managed to evade execution and survive the war. In 1965, Sendler was recognized by the State of Israel as Righteous among the Nations. Late in life she was awarded Poland’s highest honor for her wartime humanitarian efforts. She appears on a silver 2008 Polish commemorative coin honoring some of the Polish Righteous among the Nations.