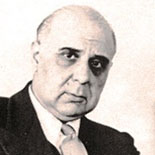 Giorgos or George Seferis (the pen name of Georgios Seferiades (March 13  – September 20, 1971), was a Greek poet-diplomat.

Seferis was one of the most important Greek poets of the 20th century, and a Nobel laureate. He was a career diplomat in the Greek Foreign Service, culminating in his appointment as Ambassador to the UK, a post which he held from 1957 to 1962.

IN THE GODDESS’ NAME I SUMMON YOUGeorge Seferis

Oil on limbs,
maybe a rancid smell
as on the chapel’s
oil-press here,
as on the rough pores
of the unturning stone.

Oil on hair
wreathed in rope
and maybe other scents
unknown to us
poor and rich
and statuettes offering
small breasts with their fingers.

Oil in the sun
the leaves shuddered
when the stranger stopped
and the silence weighed
between the knees.
The coins fell:
‘In the goddess’s name I summon you…’

Oil on the shoulders
and the flexing waist
legs grass-dappled,
and that wound in the sun
as the bell rang for vespers
as I spoke in the churchyard
with a crippled man.

We were happy all that morning
Ο God how happy.
First the stones the leaves and the flowers shone
and then the sun
a huge sun all thorns but so very high in the heavens.
Α Nymph was gathering our cares and hanging them on the trees
a forest of Judas trees.
Cupids and satyrs were singing and playing
and rosy limbs could be glimpsed amid black laurel
the flesh of young children.
We were happy all that morning;
the abyss was a closed well
οn which the tender foot of a young faun stamped
do γου remember its laughter: how happy we were!
And then clouds rain and the damp earth;
you stopped laughing when you reclined in the hut,
and opened your large eyes and gazed
on the archangel wielding a fiery sword