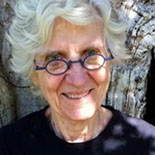 She has published three books of poetry: Olive Street Transfer, White River Junction and Long Way Home. Her autobiographical book, Wake Up Laughing: A Spiritual Autobiography, was released in 1997 by Negative Capability Press.

Pat Schneider has published widely in literary journals and magazines. Fourteen of her plays have been produced, nine published. There are more than 300 recorded productions of her plays in this country and in Europe. Pat is an alumnus of the BMI Lehman Engel Musical Theater Workshop. She has been the recipient of literary prizes, and grants from the Danforth Foundation, the Massachusetts Artists Fellowship Awards, and the Massachusetts Cultural Council.

I have learned
that life goes on,
or doesn’t.
That days are measured out
in tiny increments
as a woman in a kitchen
measures teaspoons
of cinnamon, vanilla,
or half a cup of sugar
into a bowl.

I have learned
that moments are as precious as nutmeg,
and it has occurred to me
that busy interruptions
are like tiny grain moths,
or mice.
They nibble, pee, and poop,
or make their little worms and webs
until you have to throw out the good stuff
with the bad.

It took two deaths
and coming close myself
for me to learn
that there is not an infinite supply
of good things in the pantry.

It is a kind of love, is it not?
How the cup holds the tea,
How the chair stands sturdy and foursquare,
How the floor receives the bottoms of shoes
Or toes. How soles of feet know
Where they’re supposed to be.
I’ve been thinking about the patience
Of ordinary things, how clothes
Wait respectfully in closets
And soap dries quietly in the dish,
And towels drink the wet
From the skin of the back.
And the lovely repetition of stairs.
And what is more generous than a window?
Welcoming Angels