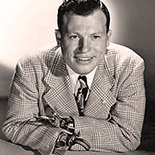 Harold John Avery Russell (January 14, 1914 – January 29, 2002) was a Canadian-American World War II veteran who became one of only two non-professional actors to win an Academy Award for acting (the other being Haing S. Ngor). Russell also holds the unique honor of receiving two Academy Awards for the same role.

In 1941, he was so profoundly affected by the December 7 attack on Pearl Harbor that he enlisted in the Army on the following day. While an Army instructor, and training with the U.S. 13th Airborne Division at Camp Mackall, North Carolina, on June 6, 1944, a defective fuse detonated an explosive he was handling while making a training film. As a result, he lost both hands and was given two hooks to serve as hands. After his recovery, and while attending Boston University as a full-time student, Russell was featured in an Army film called Diary of a Sergeant about rehabilitating war veterans.