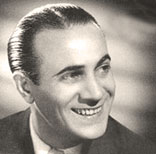 Born Constantin Rossi in Ajaccio, Corsica, France, he became a tenor of French cabaret and one of the great romantic idols of his time. Gifted with an operatic voice, a “Latin Lover” persona made him a movie star as well. Over his career, Rossi made hundreds of records and appeared in more than 25 films, the most notable of which was the 1953 production, Si Versailles m’était conté, directed by Sacha Guitry. His romantic ballads had women swooning and his art-songs by Jules Massenet (1842–1912), Reynaldo Hahn (1875–1947), and other composers helped draw sold out audiences wherever he performed. He is the only French singer to have sold over 300 million records.